There are 8 posts with the tag Iron Gods.
Page: 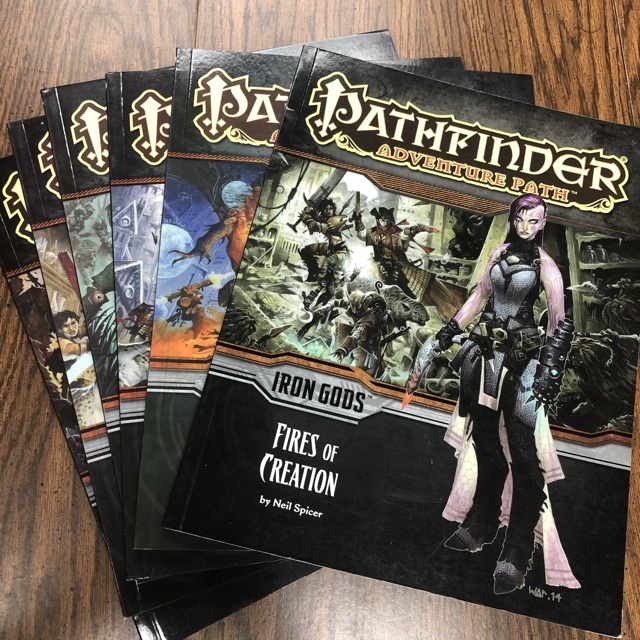 Managed to track down the full Iron Gods AP in physical format. This - along with some pocket editions I picked up - will make playing my solo games a little easier.

Last Time on Iron Gods
The party entered the ancient technological facility underneath Black Hill, and encountered a robotic drone and what appeared to be a room for housing animals. [see more]

Episode 4: Unto the Breach

Last Time on Iron Gods
The party delved deeper into the caverns underneath Torch, which they found is now being used as the home of a tribe of Skulks. The skulks offered safe passage to the party in exchange for clearing some nearby caverns of gremlins. Returning to town to rest and return the body of an adventurer they found, the party was invited to a local gambling den, the Silverdisk Hall, by a messenger with a note from Garmen Ulreth. [see more]

This is the song I think of as the theme song of my Iron Gods campaign; I think it's suitably "alien ship"-ish for that purpose.

Last Time on Iron Gods
The party set out to delve the caverns beneath the town, but ran into a fierce and unexpected monstrous foe. They retreated to the Foundry, where they prepare to once again brave the deeps… [see more]

Last Time on Iron Gods
The party was hired to delve a series of caverns beneath the town in search of the missing councilor Khonnir Baine. First, they investigated the site of the town's namesake fire; finding no clues there, they then proceeded to the Foundry tavern, a place they had been told they could use as a base of operations. On nearing the tavern, however, they discovered Val, Khonnir's adoptive daughter, under assault by a malfunctioning robot! Barek's swift blade dispatched the metallic monstrosity, and now the group plans their next move… [see more]

9 Rova 4714 AR
A little over a week ago, Durand Sorrenco arrived in Torch. He hoped to be given permission to investigate the town's namesake, for he suspected it was in fact some form of technological artifact. Over the course of the next few days, he sought the aid of others, and found it first in a pair of Kellids that, strangely, sought him out instead. He further was approached by Valki, a sullen but intense woman.

While he was searching for companions, the fires atop Black Hill guttered out; an entrance to some caverns below was discovered, effectively confirming Durand's suspicions. A few other groups, including two headed by councilor Khonnir Baine, were able to begin delving beneath the town, but since Khonnir's second expedition none have returned. The town council grows worried at Khonnir's absence, and has decided to send another party into the caves. Durand and his companions volunteered. [see more]

A few years ago, I started a solo-play of the Iron Gods adventure path. I've let it sit fallow for a while, but given the lockdown I'm looking at reviving it.

You can find a Trello board with information here. It has some useful background information and documents I'm using. [see more]